Watching soccer regularly and seeking out the latest team news and information will put you in a strong position as a soccer bettor, but much of this analysis is subjective. Taking an objective approach can build on your knowledge and help to take your betting to the next level, and that means getting to grips with statistics.

This book has already touched on general statistics, such as the information you can gather from a league table and trends analysis, but the modern football bettor can take things a step further, and this chapter aims to give you a guide to using statistics to make your soccer betting more successful.

In earlier decades, bookmakers had the advantage, as they were able to access vital information that was not available to the public, but those days are gone. Now the bettor has many statistical tools to his advantage, thanks to the internet, which offers hundreds of site and blogs offering every kind of soccer statistic

The advantage of taking a statistical approach is that it can bring clarity where there was previously confusion. It is possible to put a number on any phenomenon in soccer, from the overall strength of a team to the tackling ability of a defender, which can be vital when you are trying to analyse multiple pieces of information, particularly in the dynamic world of live soccer betting.

! Always remember precisely what a particular stat is measuring

So what statistics should you use? Much depends on your betting style, how comfortable you are with numbers, and how deeply you are prepared to go into the subject, but even a passing familiarity with the main football statistics will make you a better live soccer bettor.

One of the most commonly used statistics is possession. You will often see this statistic in match reports. It simply refers to the percentage of playing time in a game that each team has the ball but can reveal a lot about the teams. For instance, home teams tend to have more of the ball than visiting teams, while you would also expect stronger teams to have higher possession stats than weaker opponents.

Possession stats can also reveal a team’s playing style. Teams that sit back and defend, hoping to hit their opponents on the counter, will often have less of the ball, while teams with a number of technically adept passing players in their midfield are likely to have high possession stats. Once you are familiar with a team’s normal level of possession, you can look for fluctuations during live games that might suggest the team is playing in a different style or struggling to carry out their usual game plan.

Care must be taken when using statistics such as the possession figure, however. When you are using statistics, never treat them as a miracle solution, and always remember precisely what the figure is measuring. For instance, a high possession figure may indicate that a team has been dominant or it could mean that they have spent a lot of time passing the ball around, without threatening their opponents.

A similar warning applies to the use of the shots on goal statistic, which is often quoted alongside possession statistics in match reports. Knowing that a team has had twice as many shots on goal as its opponent can be revealing, but you often need to dig further. Sometimes when a team is behind in a game with time running out, they can have a lot of desperate long-range efforts to score, which makes their shots on goal statistic look impressive, but that number may not reflect their performance.

Some inventive soccer statisticians take these stats to the next level and analyse the quality of the shots taken, or the ratio of expected goals based on shot position to actual goals scored, providing a more detailed picture of a team’s performance.

This is the beauty of soccer statistics. You can choose to go deep into the subject if you choose and get involved in such concepts as Poisson distribution or negative binomial distribution, or you can play around with the statistics to come up with your own ratings or measurements.

Every successful soccer bettor uses statistics in some form, and in live soccer betting, statistics offer clear, unambiguous pieces of information which can enable you to reach the quick conclusions you need in a fast-moving live betting environment.

Although predicting the outcome of any soccer match with certainty is impossible, by using statistics, the task of assessing the strength of the teams involved will be made much easier, and your soccer betting will become more profitable and more efficient. 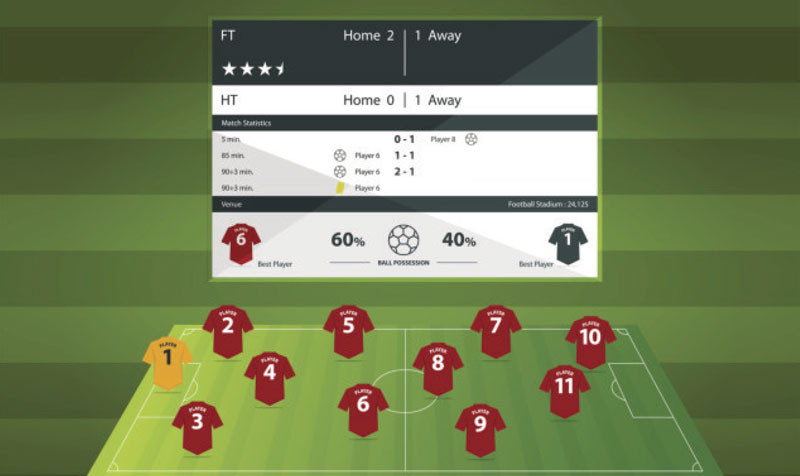